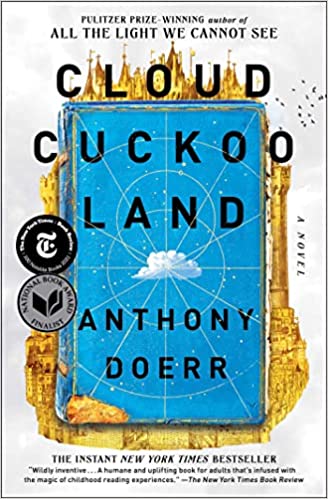 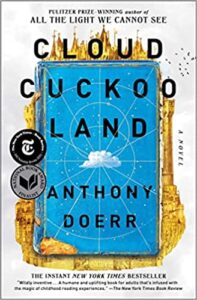 Anthony Doerr will present a lecture with some fun slides and take audience questions about his new book, Cloud Cuckoo Land.

Each ticketholder will receive a paperback copy of Cloud Cuckoo Land at the event.

Pulitzer Prize–winning author Anthony Doerr follows All the Light We Cannot See with Cloud Cuckoo Land—a triumph of imagination and compassion called a “wildly inventive, humane and uplifting book for adults that’s infused with the magic of childhood reading experiences.”

Thirteen-year-old Anna, an orphan, lives inside the walls of Constantinople. Insatiably curious, she learns to read, and finds the book of Aethon, who longs to turn into a bird and fly to paradise. As she reads, the walls are bombarded. Outside the walls is Omeir, a village boy, conscripted into the invading army. Five hundred years later, in a library in Idaho, octogenarian Zeno rehearses children in a play of Aethon’s story, remarkably preserved. On the shelves is a bomb, planted by troubled, idealistic Seymour. In a not-so-distant future, alone on the interstellar ship Argos, Konstance copies the story of Aethon, told to her by her father. Five dreamers and outsiders, intertwined as they seek, and find, resourcefulness and hope.

Anthony Doerr is the author of Cloud Cuckoo Land, which was a finalist for the National Book Award, and All the Light We Cannot See, winner of the Pulitzer Prize and the Carnegie Medal. He is also the author of the story collections Memory Wall and The Shell Collector, the novel About Grace, and the memoir Four Seasons in Rome. He has won five O. Henry Prizes, the Rome Prize, the New York Public Library’s Young Lions Award, the National Magazine Award for fiction, a Guggenheim Fellowship, and the Story Prize.