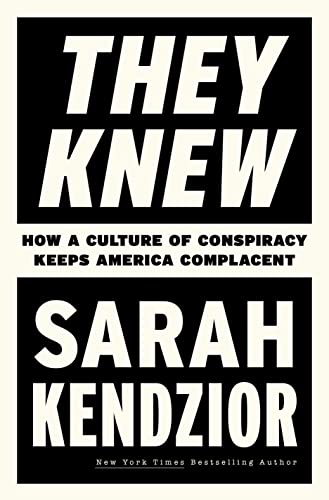 In They Knew, New York Times bestselling author Sarah Kendzior explores the United States’ “culture of conspiracy,” putting forth a timely and unflinching argument: uncritical faith in broken institutions is as dangerous as false narratives peddled by propagandists. Conspiracy theories are on the rise because officials refuse to enforce accountability for real conspiracies.

They Knew discusses conspiracy culture in a rapidly declining United States struggling with corruption, climate change, and other crises. As the actions of the powerful remain shrouded in mystery—like the Jeffrey Epstein operation—it is unsurprising that people turn to conspiracy theories to fill the informational void. They Knew exposes the tactics these powerful actors use to placate an inquisitive public.

In Kendzior’s signature whip smart prose and eviscerating arguments, They Knew unearths decades of buried American history, providing an essential and critical look at how to rebuild our democracy by confronting the political lies and crimes that have shaped us.

This event is live and in-person, and will be streamed live at: https://www.youtube.com/thelibrarychannel